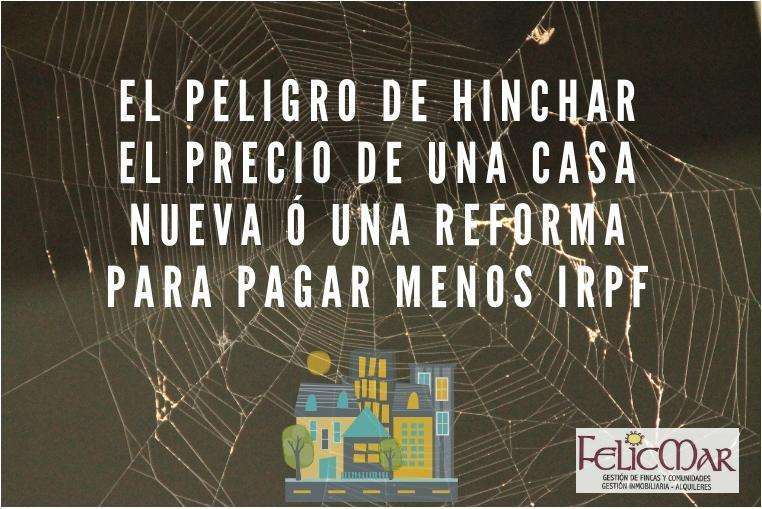 When a house is sold, the taxpayers must pay in the IRPF for the patrimonial gain that they have obtained. Many resort to picaresque to reduce this patrimonial gain by inflating the purchase value of the house. How? Declaring a value of the new work or of the reform higher than the real one, or increasing the value of the goods acquired in a legacy already prescribed. But this maneuver can be expensive: the Treasury is checking these operations to uncover irregularities.

We summarize from the hands of the law firm Attico Jurídico what are the risks and what should be taken into account in each case:
Three cases: new work, reform and prescribed inheritance

The declaration of new work can be used by some taxpayers to reduce the future patrimonial gain by the transmission of the property. It must be borne in mind that the Personal Income Tax Law considers that the acquisition value in onerous transmissions is the sum of the amount for which the property was purchased, plus the investments or improvements that have been made in it.

Temptation is served. The declaration of new work is subject to the Tax on Documented Legal Acts (AJD), with tax rates that are between 0.5% and 1.5% on the real value of the cost of the new work. The type depends on the autonomous community in which the property is located.

Therefore, as explained by José María Salcedo, partner of the law firm Attico Jurídico, "raising the cost of new construction is not fiscally expensive. And in return a reduction of the IRPF can be obtained to pay for the patrimonial gain of a future transmission. Do not forget that these profits are taxed at a rate that varies between 19% and 23%. "

Sometimes a building has not been built, and therefore there is no declaration of new work, but improvements have been made on the existing construction. In this case, the taxpayer may be tempted to provide invoices for unrealized work, in order to reduce the profit. But, again, this is a very risky maneuver: the Treasury can verify the veracity of these invoices and the works actually performed.

In addition to the new work and a reform, there is another way to reduce the value of future property gain from the sale of a property: declare the Inheritance Tax after more than four years have elapsed since the deadline to do so, taking advantage of So Hacienda can not check the value of the goods when a transmission has prescribed. Thus, adds Attico Jurídico, "the tax payable for the hereditary acquisition will be zero, whatever the value we assign to the real estate. And nevertheless for the purposes of IRPF we will be reducing the amount of the future patrimonial gain ".
Treasury, on the hunt for irregularities

Hacienda can check all these operations, and in fact it is doing it.

In relation to the new work, it must be taken into account that in the AJD the taxpayer must declare the real value of the new work. However, in the IRPF the value to declare is the cost of the new work. That is, the cost of the building raised. "We are, therefore, before different concepts and the Treasury will always ask the taxpayer to prove the cost of said building, without prejudice to the value included in the AJD declaration," says Salcedo. Something similar happens with the value of reforms or rehabilitations: the treasury can verify that the invoiced works, and their cost, correspond to reality.

In the case of a prescribed inheritance, some Superior Courts of Justice have already declared that the Treasury, when checking the IRPF, can not be bound by the values ​​included in the Inheritance Tax, since such values ​​could never be proven to have been declared after having prescribed.

Therefore, the verification of the acquisition value declared in the IRPF is possible in any of the three cases mentioned. And here comes the crux of the matter: how can Hacienda prove that there is an irregularity? Who should show that the value has been inflated? What happens if you can not prove an irregularity? We answer these questions:

On the one hand, and according to article 105.1 of the General Tax Law, each party must prove the facts that benefit it: the Administration must prove the existence of the taxable event and the taxpayer, the non-subject to a tax, as well as the application of any tax benefit (exemptions, deductions, reductions, bonuses ...). That is to say, "it will correspond to the taxpayer to credit the acquisition value of the property (and its investments and improvements), and to the Administration the transfer value. This has been stated by the TEAC recently, "clarify from Legal Attic.

In the case of goods acquired by inheritance, the value can be credited by providing the deeds of inheritance or donation. However, hemo seen that if the Treasury does not agree with them can perform a check.
How to prove the value of the new work or a reform?

As for the new work, the Courts have been stating that it is not enough to justify the value declared in the new work, or to provide an expert report, or proving what the cadastral value of the construction was. And, in the IRPF, the value of the improvements or investments is the cost. That is, the taxpayer must prove how much the new work has cost him, and not the real value of it.

When it comes to a reform or rehabilitation, the contribution of invoices may be insufficient. Some Superior Courts of Justice, like that of the Valencian Community, have been demanding additional proof from taxpayers. This can be the model declaration 347 presented by the construction company, in which the invoice has been declared (if this is more than 3,000 euros), the testimony of the builder, the existence of a project, the construction license ...
Can the Treasury consider a zero value if there is no evidence?

The first thing to keep in mind is whether the acquisition or improvement was made for consideration or free of charge.

If it is for consideration (that is, the work was paid or the constructor was reformed), the Treasury may consider that its value was zero euros in the absence of proof from the taxpayer. And it is that the taxpayer should be able to provide any evidence of the new work or reform carried out. This has been declared by some Superior Court of Justice, which considers it illogical that the taxpayer is not in a position to prove how much the new work cost him, or the reform of the property.

On the other hand, if the acquisition is free of charge (inherited property), the acquisition value can never be zero euros. The reason is that "the value that must be taken into account for income tax purposes in these cases is the real value of the property for the purposes of Inheritance and Donations Tax. Therefore, in the absence of proof of such value, the Treasury is obliged to determine this by means of a securities check ", concludes the law firm.

Subscribe to our mailing list and you will be first to receive new properties
Diseñado por CRM Inmovilla
QUESTION?
We'll call you back
Send this form with your name and phone number and we will contact you as soon as possible.
WhatsApp X
Hi!20:50
Click here to send us your questions through Whatsapp20:50

Finalidad: To send information about real estate that match the requirements of the client presented by filling this form.

Legitimación: To implement pre-contract measures to the clients request (budget request or information about our professional services).

Destinatarios: This data will arrive at the office and there is no expected data transfer if not for legal obligation.

Destinatarios: The client’s data won’t be transferred to anyone, if not for legal obligation. The real estate’s data might be delivered to collaborating real estate agencies or published on web pages and real estate portals.

Finalidad: To handle information requests through the website, aiming to offer real estate professional services and to give information about what’s requested.

Destinatarios: Your data won’t be transferred to anyone, if not for legal obligation.

Finalidad: To handle information requests through the website, aiming to offer real estate professional services and to give information about what’s requested.

Destinatarios: Your data won’t be transferred to anyone, if not for legal obligation.